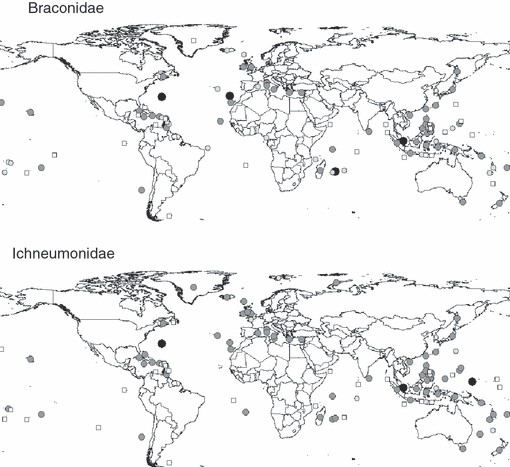 Taxonomic and geographic biases are common in biodiversity inventories, especially in hyperdiverse taxa, such as the Ichneumonoidea. Despite these problems, biodiversity databases could be a valuable source of information if their reliability is carefully assessed. One major problem of using these data for large-scale analyses is the unevenness of data quality from different areas, which makes them difficult to compare. One way of surpassing such problem would be to identify sets of areas that are evenly inventoried. Here, we propose a scoring protocol for the identification of sets of evenly inventoried areas from taxonomic databases, based on three criteria: (i) completeness at high taxonomic levels, (ii) congruence with well-established ecological relationships (such as species–area relationship), and (iii) publication effort received. We apply this protocol to the selection of a set of evenly inventoried islands worldwide for two Ichneumonoidea families (Braconidae and Ichneumonidae) from the data gathered in Taxapad database. From the 118 islands included in Taxapad, 53 and 70 can be considered sufficiently inventoried for Braconidae and Ichneumonidae, respectively. The publication effort criterion was more restrictive than the other two criteria. The Indomalayan, Nearctic and Palearctic regions had more than half of their islands identified as evenly inventoried, for both families. We discuss the generality of the biases and incompleteness of most biodiversity data, and also how the basic principles of the protocol proposed here can be applied to taxonomic databases devoted to other taxa. Also, the islands identified here can serve as the basis for large-scale analyses of the poorly known biogeography of the Ichneumonoidea.