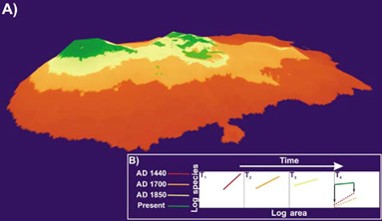 Habitat destruction is the leading cause of species extinctions. However, there is typically a time-lag between the reduction in habitat area and the eventual disappearance of the remnant populations. These “surviving but ultimately doomed” species represent an extinction debt. Calculating the magnitude of such future extinction events has been hampered by potentially inaccurate assumptions about the slope of species–area relationships, which are habitat- and taxon-specific. We overcome this challenge by applying a method that uses the historical sequence of deforestation in the Azorean Islands, to calculate realistic and ecologically-adjusted species–area relationships. The results reveal dramatic and hitherto unrecognized levels of extinction debt, as a result of the extensive destruction of the native forest:>95%, in<600 yr. Our estimations suggest that more than half of the extant forest arthropod species, which have evolved in and are dependent on the native forest, might eventually be driven to extinction. Data on species abundances from Graciosa Island, where only a very small patch of secondary native vegetation still exists, as well as the number of species that have not been found in the last 45 yr, despite the extensive sampling effort, offer support to the predictions made. We argue that immediate action to restore and expand native forest habitat is required to avert the loss of numerous endemic species in the near future.