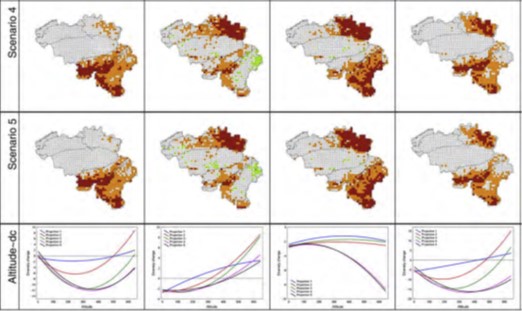 Being ectotherms, insects are predicted to suffer more severely from climate change than warm-blooded animals. We forecast possible changes in diversity and composition of butterflies, grasshoppers and dragonflies in Belgium under increasingly severe climate change scenarios for the year 2100. Two species distribution modelling techniques (Generalised Linear Models and Generalised Additive Models), were combined via a conservative version of the ensemble forecasting strategy to predict present-day and future species distributions, considering the species as potentially present only if both modelling techniques made such a prediction. All models applied were fair to good, according to the AUC (area under the curve of the receiver operating characteristic plot), sensitivity and specificity model performance measures based on model evaluation data. Butterfly and grasshopper diversity were predicted to decrease significantly in all scenarios and species-rich locations were predicted to move towards higher altitudes. Dragonfly diversity was predicted to decrease significantly in all scenarios, but dragonfly-rich locations were predicted to move upwards only in the less severe scenarios. The largest turnover rates were predicted to occur at higher altitudes for butterflies and grasshoppers, but at intermediate altitudes for dragonflies. Our results highlight the challenge of building conservation strategies under climate change, because the changes in the sites important for different groups will not overlap, increasing the area needed for protection. We advocate that possible conservation and policy measures to mitigate the potentially strong impacts of climate change on insect diversity in Belgium should be much more pro-active and flexible than is the case presently.