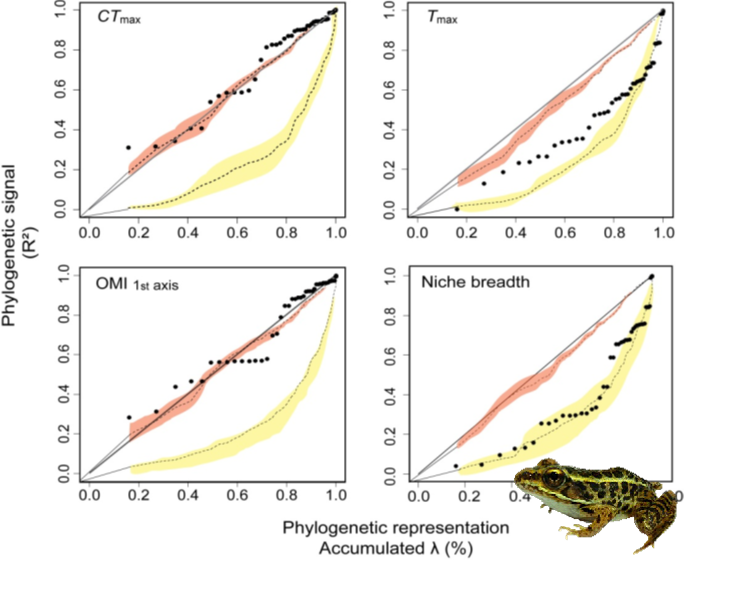 Aim. Under the Hutchinsonian concept of the realized niche, biotic interactions and dispersal limitation may prevent species from fully occupying areas that they could tolerate physiologically. This can hamper the translation of physiological limits into climatically defined range limits and distorts inferences of evolutionary changes of the adaptive limits (i.e. niche conservatism). In contrast, heritable physiological limits should conform more closely to the position of the niche in the climatic hyperspace. Here, we hypothesize that a measure of niche position in the climatic hyperspace is more reliable than niche boundaries to capture the variability and evolutionary pattern of physiological tolerance.

Methods. We used phylogenetic and non‐phylogenetic regressions to test the relationships between physiological requirements and macroecological niche features (i.e. based on known species distributions) among anurans. We use larval critical thermal maximum (CTₘₐₓ) as a measure of physiological response and maximum temperature (Tₘₐₓ), temperature variability (Tᵥₐᵣ) and the position and breadth of niche in climatic hyperspace as measures of the realized niche in geographical space. We also compare evolutionary rates among these parameters using the phylogenetic signal representation curve.

Results. CTₘₐₓ is better correlated with niche position (r² = 0.414) than with Tᵥₐᵣ, and CTₘₐₓ is unrelated to either Tₘₐₓ or niche breadth. CTₘₐₓ and macroecological niche position also show similar and rapid evolutionary rates, i.e. faster than Brownian motion, whereas Tₘₐₓ and Tᵥₐᵣ evolve more slowly and niche breadth evolves at random.

Main conclusions. The transferability between thermal tolerance and realized climatic niche limits is weak. Only macroecological niche position in the multivariate climatic hyperspace correlates with physiological tolerance. It thus appears to be more suitable for describing the variability and evolutionary pattern of the species’ adaptive limits. We link these results to ‘niche dimensionality’, in that multiple interacting factors outweigh single factors in demarcating the species’ realized climatic niche, thereby determining the conserved upper thermal limits of the species.