Santos et al. (2011 Oikos) Richness and level of generalism in parasitoids of a microlepidopteran in Macaronesia 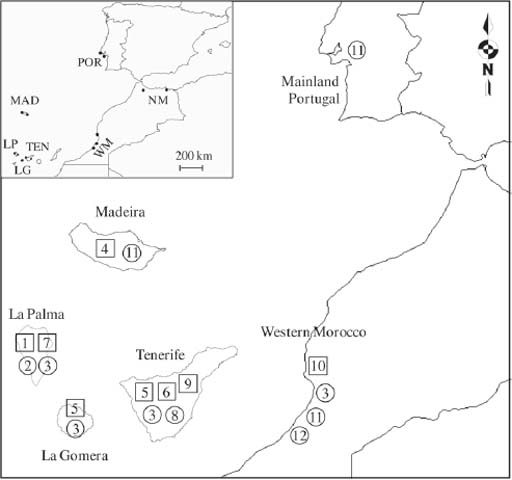 Island communities are exposed to several evolutionary and ecological processes that lead to changes in their diversity and structure compared to mainland biotas. These phenomena have been observed for various taxa but not for parasitoids, a key group in terms of community diversity and functioning. Here we use the parasitoid communities associated with the moth Acroclita subsequana (Lepidoptera: Tortricidae) in the Macaronesian region, to test whether species richness differs between islands and mainland, and whether island parasitoid faunas are biased towards generalist species. Host larvae were collected on several islands and adjacent mainland, carefully searched for ectoparasitoid larvae and dissected to recover any endoparasitoids. Parasitoids were classified as idiobionts, which usually have a wide host range (i.e. generalists), or koinobionts that are considered specialists. Mainland species richness was lower than expected by chance, with most of the species being koinobionts. On the other hand, island communities showed a greater proportion of idiobiont species. Overall parasitism rates were similar between islands and mainland, but islands had higher rates of parasitism by idiobionts than expected by chance, and mainland areas showed the highest koinobiont parasitism rates. These results suggest that island parasitoid communities are dominated by generalists, in comparison to mainland communities. Several hypotheses may explain this pattern: (1) generalist parasitoids might have better dispersal abilities; (2) they may be less constrained by ‘sequential dependencies’; and (3) island parasitoids probably have fewer competitors and/or predators, thus favouring the establishment of generalists. New studies including multiple hosts, other habitats, and/or more islands are necessary to identify which of these processes shape island parasitoid communities.