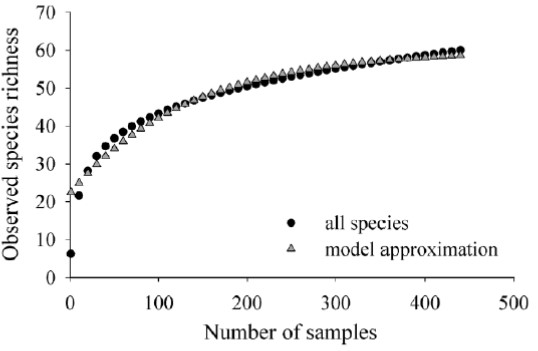 Species richness estimators (SREs) frequently exhibit widely different results when applied to the same data set. The lack of information on the true species number in an area hampers assessment of the performance of competing SREs. Marine invertebrates have been studied for more than 150 years on Helgoland (North Sea), and a fairly complete species list exists for this assemblage, providing a good opportunity for such comparisons. We evaluated the performance of 12 SREs using data on intertidal marine invertebrates of Helgoland. The Ugland TS estimator provided the most accurate estimate of total richness, whereas MMF, Semilog, and Weibull produced a moderate underestimation. The other SREs seriously under- or overestimated total richness. Although the Ugland TS estimator accounts for changes of species abundance distributions encountered when area increases, most SREs assume a homogeneous distribution. Analysis of separate accumulation curves for rare, intermediate, and common species revealed that the curvature of the randomized empirical accumulation curve of all the species is determined primarily by the occurrence of rare species. Thus, the influence of rare species was assessed through simulations of the Ugland TS. Linear extrapolation will under- or overestimate total richness if the occupancy of rare species is unusually low or high, respectively. The true occupancy of rare species in the Helgoland intertidal is likely to be close to the optimal interval revealed by our simulations, which provide a general framework for assessing the suitability of SREs for a given data set and thus improve the selection process of the optimal method.