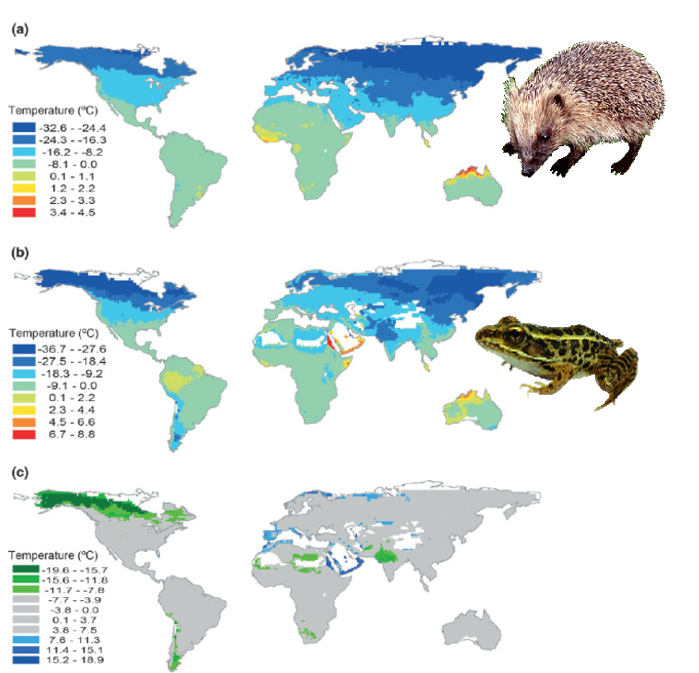 Aim Comparative evidence for phylogenetic niche conservatism – the tendency for lineages to retain their ancestral niches over long time scales – has so far been mixed, depending on spatial and taxonomic scale. We quantify and compare conservatism in the climatic factors defining range boundaries in extant continental mammals and amphibians in order to identify those factors that are most evolutionarily conserved, and thus hypothesized to have played a major role in determining the geographic distributions of many species. We also test whether amphibians show stronger signals of climatic niche conservatism, as expected from their greater physiological sensitivity and lower dispersal abilities.

Results Amphibians and mammals showed congruent patterns of conservatism in cold tolerance, with assemblages of escapee species (i.e. those escaping most from the climatic constraints of their ancestors) aggregated in the North Temperate Zone.

Main conclusions The relative strength of climatic niche conservatism varies across the variables tested, but is strongest for cold tolerance in both mammals and amphibians. Despite the apparent conservatism in this variable, there is also a strong signal of recent evolutionary shifts in cold tolerance in assemblages inhabiting the North Temperate Zone. Our results thus indicate that distribution patterns of both taxa are influenced by both niche conservatism and niche evolution.