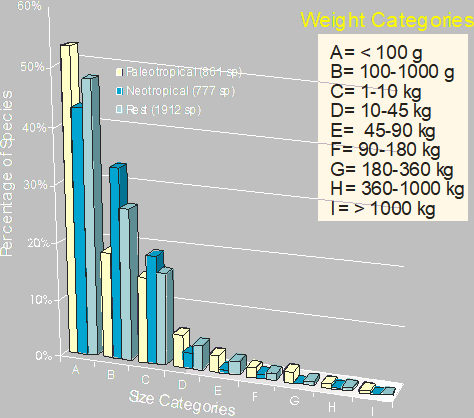 Local mammalian communities in Africa present the highest species richness in the world, only paralleled by some communities in the Oriental biogeographic region. Differences in mammalian species richness are especially outstanding when compared with South American communities, despite their similar latitudinal position and regional species richness. Recentstudy has shown that these differences are not only related to contemporary determinants but also to biogeographic-historic factors, which acted on the composition of the regional pool of species. One of the main differences in composition between the two regions relates to the high diversification of large mammals in Africa, which greatly contributes to the high values of local community richness in this region. The absence of extant large mammals in the South American region has been proposed to result from Pleistocene-Holocene extinctions, which affected large mammals all over the world. However, a gradual pattern of decrease in the abundance of large mammal species can be appreciated in almost all regions except Africa since the late Miocene and through the Pliocene. To test these hypotheses we compare the patterns of macromammal body mass distribution – at regional and local scales – in the two regions over the past 20 million years and relate the observed changes to major geological events.