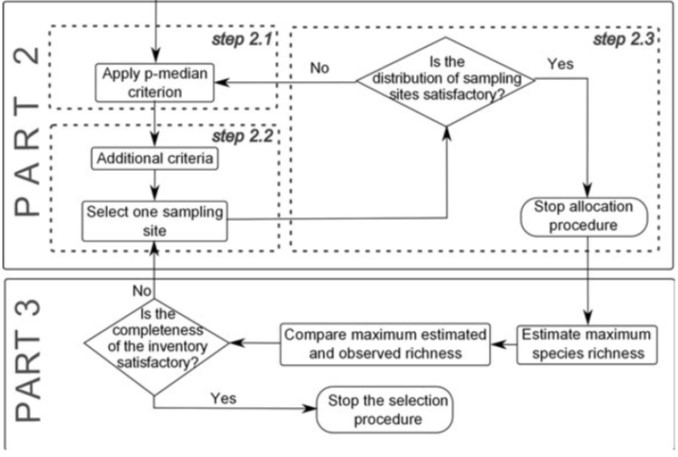 Knowledge on the distribution and abundance of species is plagued by significant taxonomic and geographic biases that influence the analyses on biodiversity patterns. Due to this, standard, easy-to-use methods are needed to design efficient field campaigns that minimize data deficiencies. We evaluate the applicability, usefulness and effectiveness of a survey design protocol based on the Environmental Diversity (ED) criterion under different scenarios, with examples of varying extent of environmental niche, range of spatial distribution and level of previous knowledge. We planned surveys for epiphytic bryophytes growing in three types of forests at NW Iberian Peninsula (dominated by Quercus ilex, Q. faginea and Q. pyrenaica). Knowledge on the distribution and abundance of epiphytic bryophytes in this region presents large gaps and strong geographic biases. Besides, the three forest types differ in their environmental requirements, spatial distribution and level of previous knowledge, providing three working scenarios to test the response of the protocol under different situations. The protocol was implemented as a set of sequential selection rules, starting by an ED-based criterion aiming at maximizing the coverage of climatic and geographic variability; further criteria include an iterative set of qualitative properties: maximizing forest area, conservation status and accessibility. The protocol performed efficiently at different ranges of spatial distribution levels of environmental variability, and degree of previous knowledge and generated an even distribution of sampling points that efficiently covered the diversity of epiphytic bryophytes. The results show that ED protocols are a proficient and time-saving approach to select sampling sites by objective criteria also for groups with high dispersal ability and fragmented landscapes.