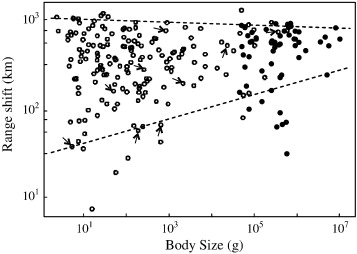 Quantitative analysis of macroecological patterns for late Pleistocene assemblages can be useful for disentangling the causes of late Quaternary extinctions (LQE). However, previous analyses have usually assumed linear relationships between macroecological traits, such as body size and range size/range shift, that may have led to erroneous interpretations. Here, we analyzed mammalian datasets to show how macroecological patterns support climate change as an important driver of the LQE, which is contrary to previous analyses that did not account for more complex relationships among traits. We employed quantile regression methods that allow a detailed and fine-tuned quantitative analysis of complex macroecological patterns revealed as polygonal relationships (i.e., constraint envelopes). We showed that these triangular-shaped envelopes that describe the macroecological relationship between body size and geographical range shift reflect nonrandom extinction processes under which the large-bodied species are more prone to extinction during events of severe habitat loss, such as glacial/interglacial transitions. Hence, we provide both a theoretical background and methodological framework to better understand how climate change induces body size-biased species sorting and shapes complex macroecological patterns.