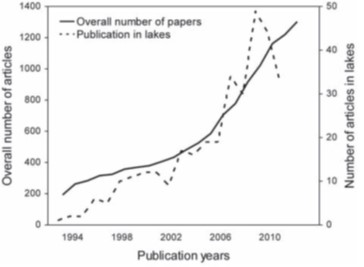 Macroecology studies large-scale patterns aiming to identify the effects of general ecological processes. Although lakes (and ponds) are particularly suited for macroecological research due to their discrete nature and non geographically-structured variability, the development of this discipline in lentic habitats is comparatively much smaller than for terrestrial environments. This is despite the interest of limnologists for large-scale phenomena, which results in the high level of development of some disciplines such as predictive limnology. Here we discuss how current state-of-the-art in macroecology may benefit from research in lentic habitats at five topics. First, by including an island biogeography analytical framework to incorporate the effects of lake origin and history on lentic biodiversity. Second, by studying local and regional effects on the latitudinal gradients of species richness. Third, by considering lakes and ponds altogether for the study of beta diversity and metacommunity structure, which is already common ground in limnological research. Fourth, by relating species traits with ecosystem structure and functioning; here we consider in particular the potential effects of body size-determined dispersal and competitive exclusion processes on lake-wide trophic organization. And fifth, by incorporating current research in functional (i.e. trait) and phylogenetic diversity to the study of community structure. We finally conclude that lentic habitats can be particularly important for the development of the most functional aspects of macroecology, due to the relative ease of studying the different biotic and abiotic components of the system separately, compared to most terrestrial systems. This can allow teasing apart many of the confounding factors that are characteristic of macroecological research, thus helping the development of future theoretical syntheses.