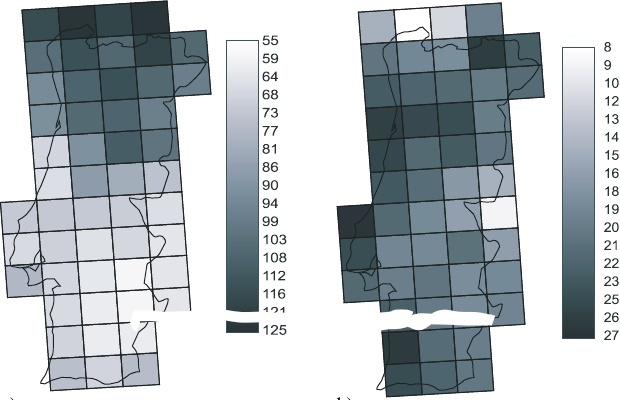 A three-step protocol described elsewhere is used to obtain a map of butterfly species density in Portugal on a 50×50 km grid. First, all available faunistic information was compiled and analysed to explore the historic patterns of butterfly sampling in Portugal, and to determine which grid cells are sufficiently prospected to produce reliable estimates of species richness. Then, we relate the estimated species richness scores from these areas to a set of environmental and spatial variables by means of General Linear Models, obtaining a function to extrapolate of species density scores to the rest of Portugal. Finally, the model is validated, results explored and outliers identified and deleted. Any spatial autocorrelation remaining in the residuals is examined. Lastly, model parameters are recalculated in absence of deleted outliers, and the resulting function is used to predict species richness scores throughout mainland Portugal. A highly-predictive function based on some variables previously related to butterfly composition at macro-scale, such as number of sunny days per year, temperature or environmental heterogeneity, was obtained. However, in Portugal those variables are highly spatially structured along a steep latitudinal gradient, leading to difficulty in ascertaining if the latitudinal gradient detected by our analysis is due to macroecological or historic effects. Information on European and Iberian butterfly assemblages and causal processes are discussed in the light of the patterns observed. Then, previous information obtained on Portuguese scarabs is added to identify conservation areas, biogeographically important for both insect groups. Finally, the main drawbacks and advantages of this approach to mapping biodiversity for conservation are discussed briefly.