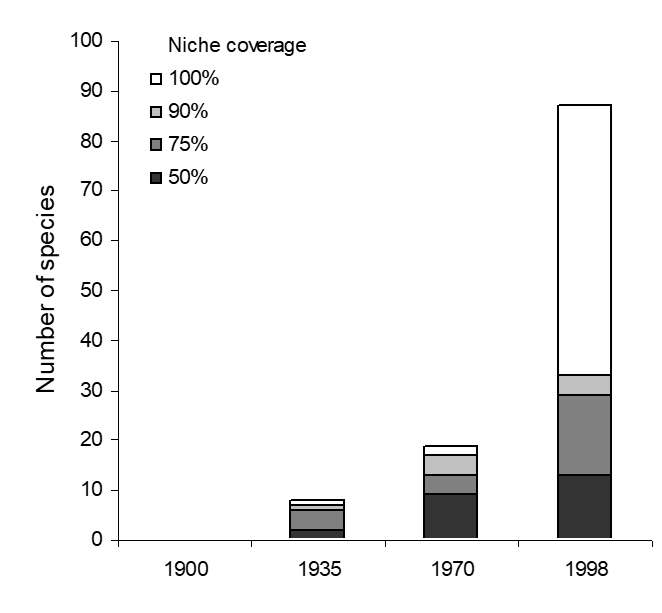 It is well known that biodiversity data from historical inventories presents important geographic and taxonomic biases. Due to this, current knowledge on the distribution of most species could be incomplete and biased. We assess how the biases in historical biodiversity data might affect the description of the environmental niche of the species, using exhaustive data on the distribution of dung beetles in Madrid as a case study. We describe the historical process of survey and compare such historical data with the results of an exhaustive survey, identifying the environmental biases in the historical surveys during different periods, and assessing the completeness of the environmental niche of the species provided by historical data through time. Events like the Spanish Civil War affect the tempo and spread of surveys, but the exhaustive work since 1970 provides a good, though incomplete, coverage of the region by 1998. In spite of this, the biases in historical data result in a limited knowledge about the niche of an important number of species. Although nearly a half of the species had the 100% of their niche covered by data in 1998, roughly a third had less than 75%, nearly a fourth less than 50%, and 18 species had to be excluded from the analyses due to the lack of data. Our results point out that data from non-standardized inventories often provide an incomplete description of the environmental responses of most species. Due to this, we highlight that currently predictive models of species distributions present some limitations, since the results of models based in partial information about the environmental niche of the species will be compromised. Therefore, the biases in the available data must be evaluated before constructing predictive maps of species distributions, and taken into account when drawing conclusions or conservation strategies from these maps.