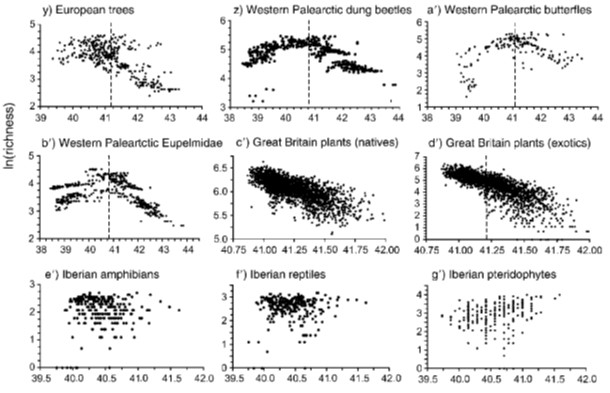 We compiled 46 broadscale data sets of species richness for a wide range of terrestrial plant, invertebrate, and ectothermic vertebrate groups in all parts of the world to test the ability of metabolic theory to account for observed diversity gradients. The theory makes two related predictions: (1) ln-transformed richness is linearly associated with a linear, inverse transformation of annual temperature, and (2) the slope of the relationship is near −0.65. Of the 46 data sets, 14 had no significant relationship; of the remaining 32, nine were linear, meeting prediction 1. Model I (ordinary least squares, OLS) and model II (reduced major axis, RMA) regressions then tested the linear slopes against prediction 2. In the 23 data sets having nonlinear relationships between richness and temperature, split-line regression divided the data into linear components, and regressions were done on each component to test prediction 2 for subsets of the data. Of the 46 data sets analyzed in their entirety using OLS regression, one was consistent with metabolic theory (meeting both predictions), and one was possibly consistent. Using RMA regression, no data sets were consistent. Of 67 analyses of prediction 2 using OLS regression on all linear data sets and subsets, two were consistent with the prediction, and four were possibly consistent. Using RMA regression, one was consistent (albeit weakly), and four were possibly consistent. We also found that the relationship between richness and temperature is both taxonomically and geographically conditional, and there is no evidence for a universal response of diversity to temperature. Meta-analyses confirmed significant heterogeneity in slopes among data sets, and the combined slopes across studies were significantly lower than the range of slopes predicted by metabolic theory based on both OLS and RMA regressions. We conclude that metabolic theory, as currently formulated, is a poor predictor of observed diversity gradients in most terrestrial systems.