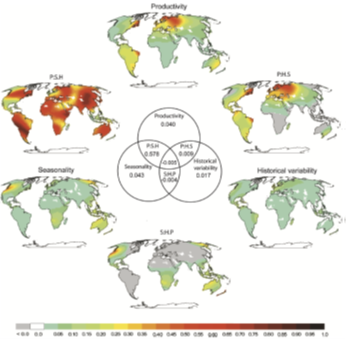 Attempts to explain the origin of species diversity gradients often lack generality across geographic regions or taxa. One possible reason for this is that species respond differently to the same environmental descriptors (e.g. climate) across geographical space, i.e. the diversity–environment relationship is spatially nonstationary. Here we evaluate the spatial nonstationarity of the relationships between amphibian species richness and variables representing three primary climatic hypotheses: historical climate variability, seasonality and productivity. We formulated nonstationary explicit predictions for the taxon based on its ecophysiological attributes. We employed two global approaches that assume stationarity – standard non-spatial OLS regression and spatial eigenvector mapping (SEVM) – and compared them with a nonstationary partial GWR (Geographically Weighted Regression), which allows the investigation of the relative contributions of each predictor regionally, helping to portray large-scale patterns. Although productivity was a better correlate to species richness than the other factors in both global and local approaches, no single hypothesis fully explained the worldwide pattern of species richness. Spatial nonstationarity was present in all relationships, and substantial fractions of the variation in the data were unexplained due to collinearity. We discuss some noteworthy regional cases and propose that the history of exposure to specific environmental conditions is responsible for geographical differences in the amphibian–climate relationships, as stated by the niche conservatism hypothesis. Finally, we argue that there is a trade-off in the selection of the spatial scale analysed – regional vs global – regarding the generality vs the explanatory power of the resulting pattern of species richness.