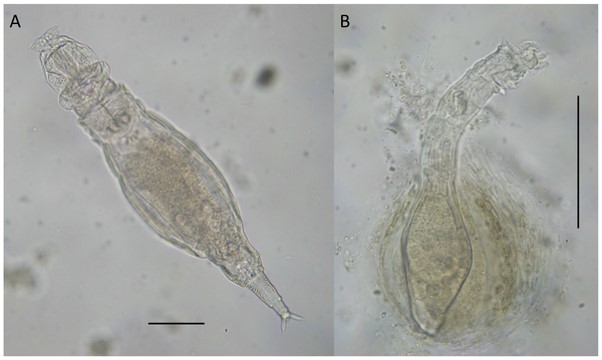 Macroecology and biogeography of microscopic organisms (any living organism smaller than 2 mm) are quickly developing into fruitful research areas. Microscopic organisms also offer the potential for testing predictions and models derived from observations on larger organisms due to the feasibility of performing lab and mesocosm experiments. However, more empirical knowledge on the similarities and differences between micro- and macro-organisms is needed to ascertain how much of the results obtained from the former can be generalised to the latter. One potential misconception, based mostly on anedoctal evidence rather than explicit tests, is that microscopic organisms may have wider ecological tolerance and a lower degree of habitat specialisation than large organisms. Here we explicitly test this hypothesis within the framework of metacommunity theory, by studying host specificify in the assemblages of bdelloid rotifers (animals about 350 µm in body length) living in different species of lichens in Sweden. Using several regression-based and ANOVA analyses and controlling for both spatial structure and the kind of substrate the lichen grow over (bark vs rock), we found evidence of significant but weak species-specific associations between bdelloids and lichens, a wide overlap in species composition between lichens, and wide ecological tolerance for most bdelloid species. This confirms that microscopic organisms such as bdelloids have a lower degree of habitat specialisation than larger organisms, although this happens in a complex scenario of ecological processes, where source-sink dynamics and geographic distances seem to have no effect on species composition at the analysed scale.