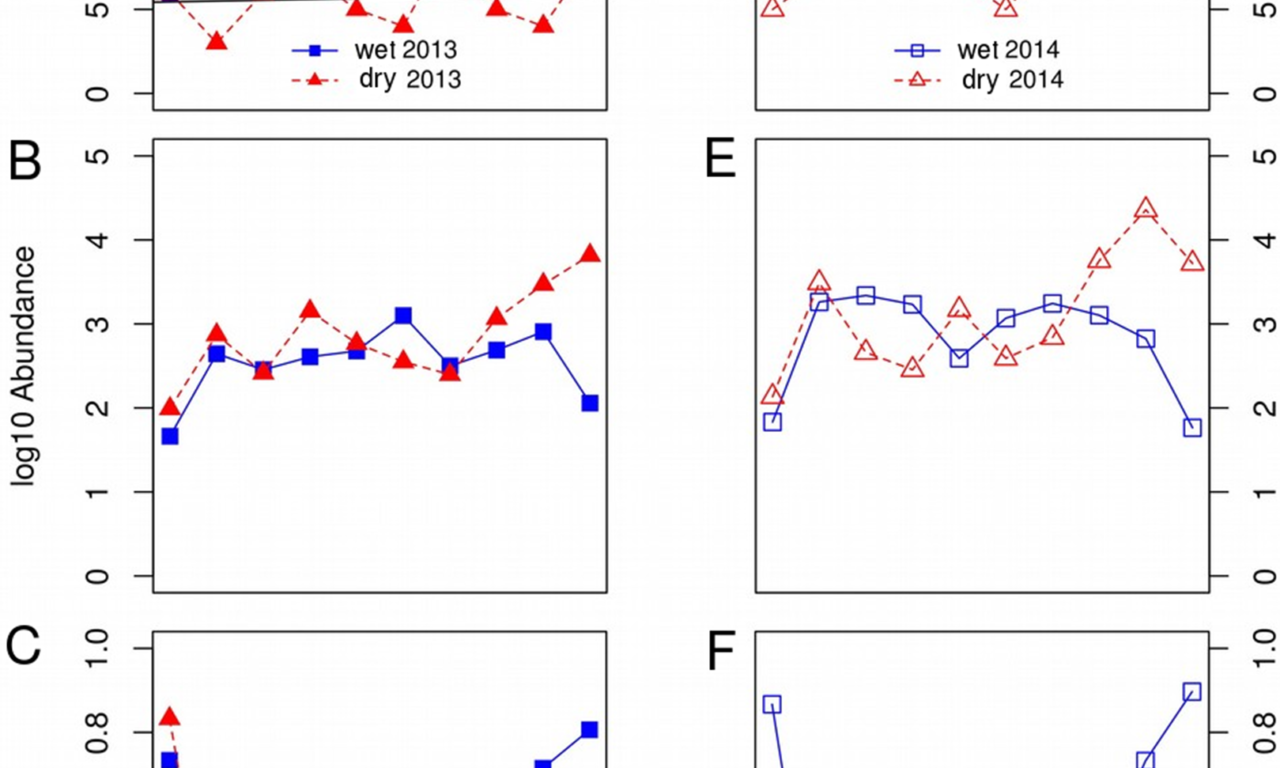 Background Assemblage responses to environmental gradients are key to understand the general principles behind the assembly and functioning of communities. The spatially and temporally uneven distribution of water availability in drylands creates strong aridity gradients. While the effects of spatial variations of aridity are relatively well known, the influence of the highly-unpredictable seasonal and inter-annual precipitations on dryland communities has been seldom addressed.

Aims Here, we study the seasonal and inter-annual responses of dung beetle (Coleoptera, Scarabaeidae) communities to the variations of water availability along a semiarid region of the Mediterranean.

Methods We surveyed a 400 km linear transect along a strong aridity gradient from the Mediterranean coast to the Sahara (Eastern Morocco), during four sampling campaigns: two in the wet season and two in the dry season. We measured species richness, abundance and evenness. Variations in community composition between sites, seasons and years were assessed through beta diversity partitioning of dissimiliarity metrics based on species occurrences and abundances. The effects of climate, soil, vegetation and dung availability were evaluated using Spearman-rank correlations, general linear regressions and partial least-squares generalized linear regressions for community structure, and non-metric multi-dimensional scaling, Permutational Analysis of Variance (PERMANOVA) and distance-based RDA variation partitioning for compositional variations.

Results Dung beetle abundance and species richness showed large seasonal variations, but remained relatively similar between years. Indeed, aridity and its interaction with season and year were the strongest correlates of variations in species richness and composition. Increasing aridity resulted in decreasing species richness and an ordered replacement of species, namely the substitution of the Mediterranean fauna by desert assemblages dominated by saprophagous and generalist species both in space towards the Sahara and in the dry season.

Discussion Our study shows that aridity determines composition in dung beetle communities, filtering species both in space and time. Besides the expected decrease in species richness, such environmental filtering promotes a shift towards generalist and saprophagous species in arid conditions, probably related to changes in resource quality along the transect and through the year. Our results highlight the importance of considering the effects of the highly-unpredictable seasonal and inter-annual variations in precipitation when studying dryland communities.