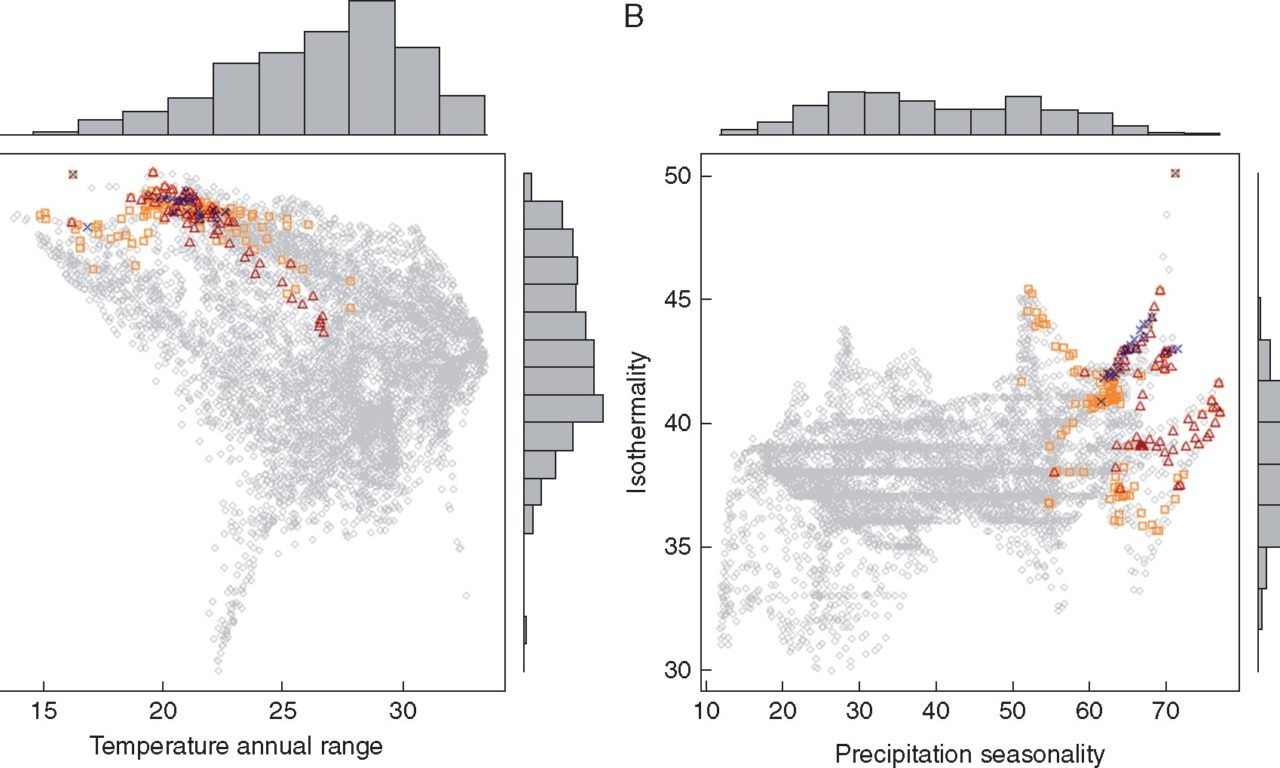 Background and Aims The geographical distributions of species are constrained by their ecological requirements. The aim of this work was to analyse the effects of environmental conditions, historical events and biogeographical constraints on the diversification of the three species of the western Mediterranean shrub genus Stauracanthus, which have a parapatric distribution in the Iberian Peninsula.

Methods Ecological niche factor analysis and generalized linear models were used to measure the response of all Stauracanthus species to the environmental gradients and map their potential distributions in the Iberian Peninsula. The bioclimatic niche overlap between the three species was determined by using Schoener’s index. The genetic differentiation of the Iberian and northern African populations of Stauracanthus species was characterized with GenalEx. The effects on genetic distances of the most important environmental drivers were assessed through Mantel tests and non-metric multidimensional scaling.

Key Results The three Stauracanthus species show remarkably similar responses to climatic conditions. This supports the idea that all members of this recently diversified clade retain common adaptations to climate and consequently high levels of climatic niche overlap. This contrasts with the diverse edaphic requirements of Stauracanthus species. The populations of the S. genistoides–spectabilis clade grow on Miocene and Pliocene fine-textured sedimentary soils, whereas S. boivinii, the more genetically distant species, occurs on older and more coarse-textured sedimentary substrates. These patterns of diversification are largely consistent with a stochastic process of geographical range expansion and fragmentation coupled with niche evolution in the context of spatially complex environmental ﬂuctuations.

Conclusions: The combined analysis of the distribution, realized environmental niche and phylogeographical relationships of parapatric species proposed in this work allows integration of the biogeographical, ecological and evolutionary processes driving the evolution of species adaptations and how they determine their current geographical ranges.