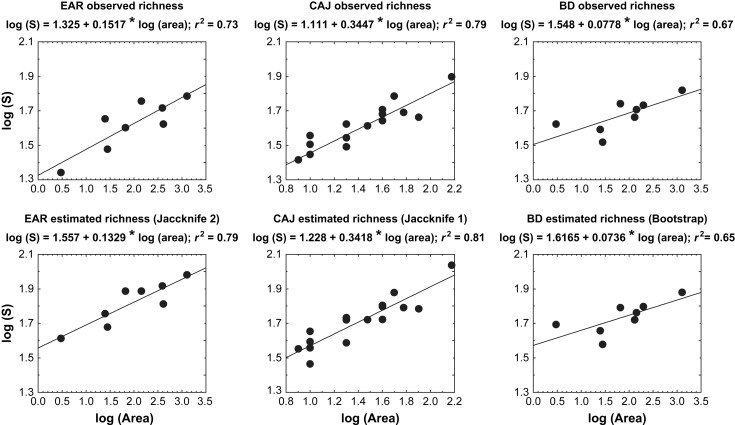 We evaluate whether the description of the species area relationship (SAR) can be improved by using richness estimates instead of observed richness values. To do this, we use three independent datasets gathered with standardized survey methods from the native laurisilva forest of the Azorean archipelago, encompassing different distributional extent and biological groups: soil epigean arthropods at eight forest fragments in Terceira Island, canopy arthropods inhabiting Juniperus brevifolia at 16 forest fragments of six different islands, and bryophytes of seven forest fragments from Terceira and Pico islands. Species richness values were estimated for each forest fragment using seven non-parametric estimators (ACE, ICE, Chao1, Chao2, Jackknife1, Jackknife2 and Bootstrap; five in the case of bryophytes). These estimates were fitted to classical log–log species–area curves and the intercept, slope and goodness of fit of these curves were compared with those obtained from the observed species richness values to determine if significant differences appear in these parameters. We hypothesized that the intercepts would be higher in the estimated data sets compared with the observed data, as estimated richness values are typically higher than observed values. We found partial support for the hypothesis – intercepts of the SAR obtained from estimated richness values were significantly higher in the case of epigean arthropods and bryophyte datasets. In contrast, the slope and goodness of fit obtained with estimated values were not significantly different from those obtained from observed species richness in all groups, although a few small differences appeared. We conclude that, although little is gained using these estimators if data come from standardized surveys, their estimations could be used to analyze macroecological relationships with non-standardized observed data, provided that survey incompleteness and/or unevenness are also taken into account.