Baselga et al. (2007 Biodiv Conserv) Which leaf beetles have not been yet described? 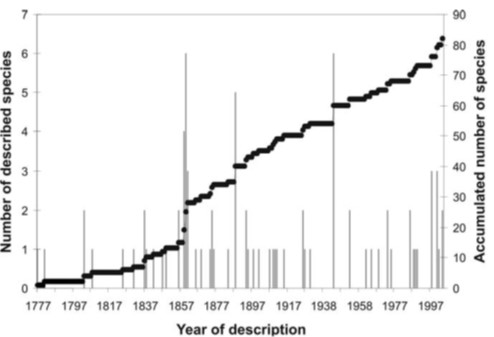 The degree of completeness of the western Palaearctic inventory of the genus Aphthona and the factors that have determined the process of species description in the region were analysed. The historic species accumulation curve shows no asymptotic trend so no accurate estimations could be made of the number of species to be discovered in the future, but the shape of the curve indicates that a significant proportion of the taxa remains yet-to-be-described and thus further taxonomic effort will be needed. In order to optimise this taxonomic work, several morphologic, trophic and geographic variables of Aphthona species were analysed, in a search for the factors that have influenced the probability of discovery of taxa and thus to estimate the characteristics of the yet-to-be-described species. General Regression Models and variation partitioning were used to assess the influence on the process of species description of body size and colour, trophic range, number of host plants, geographic range size, maximum and minimum latitude and longitude. Morphological variables are not statistically significant in explaining the variation in the year of description, whereas trophic and geographic variables are essential determinants. The pure effects of geographic range size, trophic variables and geographic location of taxa are negligible, but the shared effects between the three groups of variables account for important portions of the variation; the whole model explains 64% of the variance. Widely distributed and trophic generalist species living in northern and western areas of the western Palaearctic region were described first. Extrapolation of the observed pattern should yield an estimate of the probable features and location of the yet-to-be-described species. New Aphthona should be searched for southwards and eastwards, distributed in small areas and living on a single, or very few, host plants.