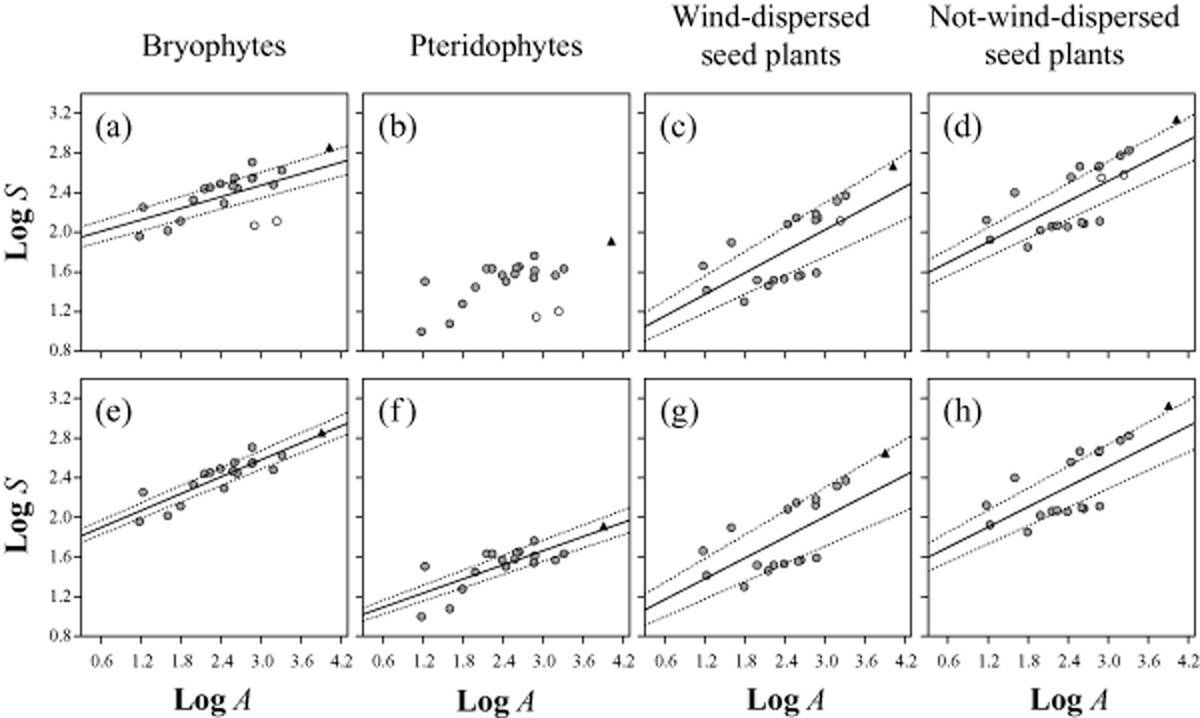 Aim. We explore the island species–area relationships (ISARs) of several plant groups differing in dispersal ability. We examine whether: (i) the ISAR slope is higher for less dispersive groups (diminishing from not-wind-dispersed seed plants to wind-dispersed seed plants, pteridophytes and bryophytes); and (ii) the regional richness is higher than that predicted by the ISAR of its constituent islands for groups with lower dispersal ability. Additionally, we relate both patterns to the compositional dissimilarity (beta diversity) between islands.

Location.The Macaronesian archipelagos of the Azores, Madeira and Canary Islands.

Methods.ISARs were estimated using the conventional power model. Differences in slopes among taxa were analysed through ANCOVA tests. We assessed the deviation of the total richness of the Macaronesian flora from that predicted by the ISAR and calculated several measures of beta diversity (turnover, nestedness-resultant dissimilarity and nestedness). Analyses were repeated after excluding the two Canarian islands of Lanzarote and Fuerteventura, which have unique climatic and geological conditions in the region.

Results.All ISAR models were significant except for pteridophytes (for which it was significant when excluding Lanzarote and Fuerteventura). ISAR slopes did not differ among taxa. Regional richness followed ISAR predictions for bryophytes and pteridophytes when Lanzarote and Fuerteventura were excluded, while the total number of Macaronesian seed plants (particularly not-wind-dispersed species) always fell above the ISAR. Turnover was higher in seed plants than in bryophytes and pteridophytes, and the opposite occurred with nestedness.

Main conclusions. Differences in dispersal ability influence the compositional dissimilarity between these islands, but not the rate of species increase with area. This may be because ISAR slopes are mostly determined by within-island processes of species accumulation, while differences in dispersal generate different between-island patterns. The lack of relationship between the ISAR slope and species replacement or nestedness prevents its use as a proxy for beta diversity.