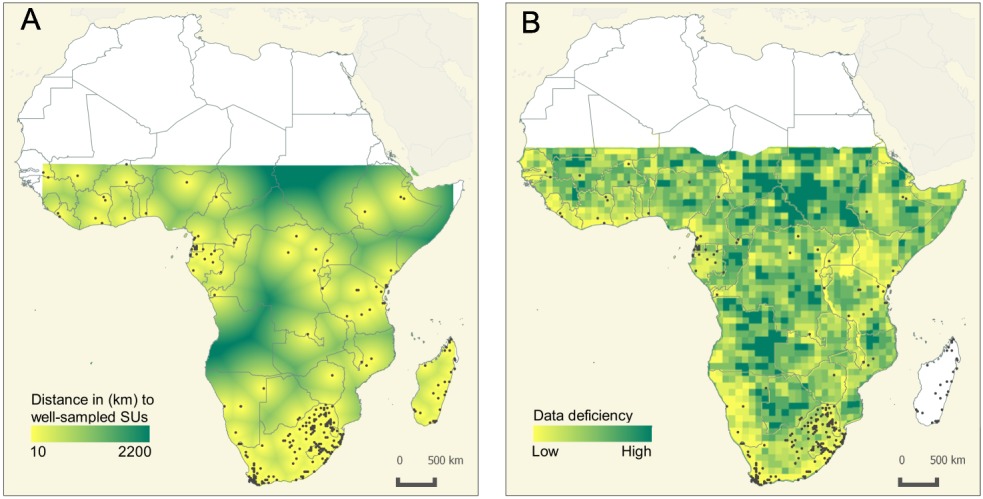 Methods By filtering a publicly available dataset containing 3.5 million records of flowering plants, we obtained 934,676 herbarium specimens with complete information regarding species name, date and location of collection. Based on these specimens, we estimated inventory completeness for sampling units (SUs) of 25 km × 25 km. We then tested whether the spatial distribution of well-sampled SUs was correlated with temporal parameters of botanical sampling. Finally, we determined whether inventory completeness in individual countries was related to old or recently collected specimens.

Results Thirty-one per cent of SUs contained at least one specimen, whereas only 2.4% of SUs contained a sufficient number of specimens to reliably estimate inventory completeness. We found that the location of poorly sampled areas remained almost unchanged for half a century. Moreover, there was pronounced temporal bias towards old specimens in South Africa, the country that holds half of the available data for the continent. There, high inventory completeness stems from specimens collected several decades ago.

Main conclusions Despite the increasing availability of species occurrence data for Africa, broad-scale biogeographical research is still compromised by the uncertain quality and spatial and temporal biases of such data. To avoid erroneous inferences, the quality and biases in species-occurrence data should be critically evaluated and quantified prior to use. To this end, we propose a quantification method based on inventory completeness using easily accessible species-occurrence data.